Grace Treads The Red Carpet with other Celebrities at Film Premiere

On 2nd November 2011, GRACE KENNEDY attended the premiere at the Empire Leicester Square of ‘Michael Jackson’ – ‘The Life of an Icon’ film produced by David Gest.

Grace was interviewed on the red carpet along with Tito Jackson, Rebbie Jackson, Martha Reeves amongst other celebrity guests. 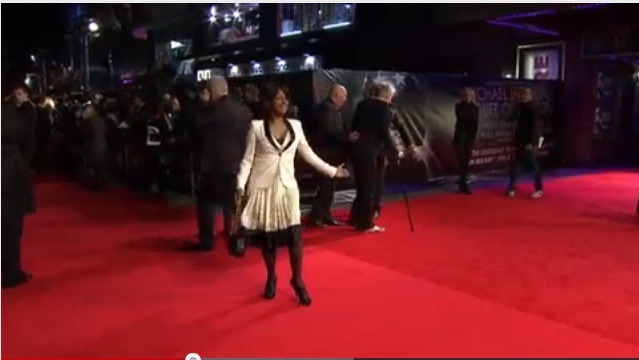 The movie brought back many happy memories to Grace as Michael had a big influence on Grace’s early years.

When the Jackson Five first visited the UK, Grace was just 13 years old and as an ardent Jackson fan, Grace managed to gain access to the Churchill Hotel in London where the group were staying.   Hiding behind a food trolley Grace gained access to the floor where the Jackson’s rooms where located.

Grace began knocking on doors saying  ‘Is this the Jackson Five’s room?’

‘No they’re not here, go away.’ was the usual reply.

Grace was determined to meet her idols and would not give up.   Eventually after knocking on many doors a voice replied  ‘Who is it?’.  Grace immediately recognised Michael Jackson’s distinctive voice.

‘It’s me Grace, one of your fans, please can I have your autograph?  Please open the door, all I want is your autograph and then I will go away’ pleaded Grace.

The Jacksons refused to open the door until eventually Michael opened the door a little to see who this persistent fan was.

‘Please can I have an autograph otherwise the other girls downstairs will not believe me that I have met the JACKSON FIVE!’

Michael relented and began looking for a pen and a piece of paper to write his autograph. After being unable to find any paper Michael eventually tore off the breakfast menu from the back of the door and signed it and then his brothers signed it too!

Grace thanked them, grabbed the piece of paper and ran down the corridor, got into the lift and ran out of the lobby on the ground floor to outside where the fans were still waiting and shouting

The girls went mad and tried to pull the paper away from Grace and were screaming at the same time  ‘How did you do it?’

Grace managed to hang on to the paper and happily went home although she had to walk all the way home as all the buses had stopped running and it was very late.

Four years later whilst developing her own career as a singer Grace met the Jackson Five again. This time it was in different circumstances in a club in Sheffield where they were performing. Grace’s manager introduced Grace to the Jackson’s in their dressing room before the show. Grace enjoyed a lively discussion with the Jacksons about fashion; music and success.

Grace then went out to watch the show and was delighted when the Jackson’s dedicated one of their songs to her.

Grace was delighted to be asked to attend the premiere in London as it brought back so many great memories of a very talented man who will be sadly missed and who will always be in the true sense of the word ‘An Icon’.

Your very own Royal Wedding?